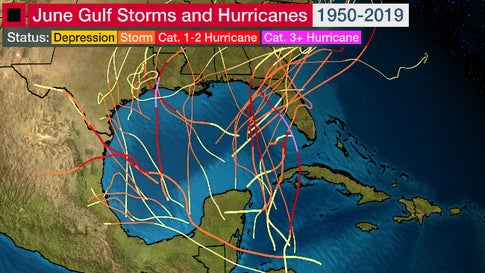 The annual Atlantic Hurricane Season is the time of year when tropical cyclones usually form in the ocean in the central Atlantic Ocean. Most of the large hurricanes that hit the United States or the Caribbean will form on the eastern side of these oceans during the first half of the season. They will weaken by the middle of August and move slowly north into the Gulf of Mexico or towards the southern part of the Caribbean.

The main difference between a hurricane in the eastern and central tropical area is the strength of winds, which they may not reach tropical storm or hurricane status. Most of the hurricanes that hit the United States in the central area form near the coast where the central pressure is low. The hurricane seasons in the Eastern North Pacific and the Central North Pacific, both have strong winds in August and September. There is a difference in the intensity of these winds, and some of the strongest storms and hurricanes that hit the central or Eastern North Pacific hit the southern areas of Canada.

Hurricanes in the Central North Pacific are called cyclones, hurricane, tropical, or hurricane depressions because they form on the western coast of North America during the summer. The main difference in these conditions is that most of these cyclones develop rapidly over warmer waters than those which develop slowly over the warmer waters of the central tropical area. The winds that develop in these cyclones often have higher wind speeds which result in much stronger winds than the winds that normally develop in cyclones on the eastern coast of North America.

Hurricane history can vary greatly in strength from year to year, but there are a few general trends which are consistent throughout each hurricane season. The most important factor is the geographic location where the storm forms. Since there is less wind speed on the western coast of North America and the western part of South America, hurricanes in these areas have more power.